So you are looking to hire (or buy for that matter) some Radio/Wireless microphones and you don’t really understand what you will get or the additional equipment you will need to complete the system? Well look no further as we explain things for you..

Firstly do you have a suitable sound reinforcement system or do you need this as well?

A sound reinforcement system is the loudspeakers and amplifiers along with audio mixer required to connect the Radio/Wireless microphones in to so your audience can hear the amplified sound coming from the actual microphones.

The audio mixer will need to have at least the same number of microphone inputs (preferably 3pin XLR sockets) equal to the total number of all microphones you intend to use plus additional inputs for music or sound effects playback etc. If you have this equipment but aren’t sure if it’s suitable for a particular requirement just tell us the make and model of the equipment, or email photos if you prefer, and we’ll advise you. If you’re using a venue with it’s own sound reinforcement system you can make contact with the people who look after the equipment there and ask these same questions.

Radio or Wireless microphones? They are the same thing. Some people call them “Radio Microphones” and some call them “Wireless Microphones”. Either way this is what they are made up of…

A microphone capsule which is either “Headset” or “In Hair” type that connects via a thin cable usually around a meter in length into a ”Belt Pack Transmitter”. Alternatively this could be a Handheld Microphone Transmitter so as to avoid any cabling on a stage. These transmitters convert the audio from the microphone capsule into radio waves that are broadcast over a short range which is then picked up by the receiver. The receiver then converts the radio waves back to an audio signal and a conventional microphone cable is used to connect the audio signal from the receiver into a stage box or directly into an audio mixer. The mixing desk control the levels of all microphones being used along with other associated equipment such as audio playback equipment and musical instruments into the amplifiers and then out through the loudspeakers for your audience to hear.

For “Drama and Musical Theatre” the supplied microphones are most often a “Beige” skin tone colour, though Black, Brown and even White colour options can also be supplied on request.

The microphones that are used with ”Belt Pack Transmitters” comprise of a ”Microphone Capsule” that picks up the audio which has a diameter of approximately 6mm and length of approximately 10mm. This small size makes them hardly visable to an audience. This microphone capsule is attached to a cable approximately 1mm in diameter and anywhere between 1mtr – 1.5mtr in length which connects to the belt pack transmitter using a small connector.

An “In Hair” microphone is one that goes through the hair or under a wig and the microphone capsule is positioned just foreward of the hairline on the forehead or just in front of the ear if preferred? These can be held in position by the likes of “Hair Grips” or “Medical Tape” etc.

The transmitters are either Belt Packs, where you add a microphone as explained above, or a Handheld Transmitter where the microphone capsule is included as part of it. Both variations have the necessary electronics enabling you to use the microphones on a stage etc without trailing cables. The transmitters electronics are usually powered by 2 x AA Alkaline (or Rechargable) Batteries. Typically a set of batteries lasts around 6 – 8 hours.

Velcro fastened Transmitter Pack Belts are available and are used to hold and protect a belt pack transmitter under a costume when it’s not possible use the clip on the belt pack to attach to clothing.

Batteries and Transmitter Pack Belts can be supplied on request for an additional charge.

The receivers are the electronics that pick up the audio signals from the transmitters. These are usually supplied in pairs (more often these days as quads depending on the make and model) and are supplied mounted in multiples of 1u rack spaces in cases for ease of transport and setup at the venue. 1u of rack space is 44mm high x 483mm wide. This is industry standard though the depth of the cases is often between 250mm – 500mm deep depending on the equipment supplied.

Each ”Transmitter” requires it’s own ”Receiver Channel” so if you want to use 08 x Radio/Wireless microphones you need 08 x Transmitters and 08 x Receivers along with 08 x Microphone Inputs on the venues (or your own) Sound Reinforcement System Audio Mixer. This is required just to use these Radio/Witeless microphone systems alone.

Each ”Transmitter” and its associated ”Receiver“ must be paired together and tuned to precisely calculated frequencies to avoid interference and this should only be done by an ”Experienced Technician” who has a complete understanding of how this equipment works.

This type of equipment we at Sound Hire supply for hire is provided already setup on these specifically calculated frequencies. We strongly advise you speak to us BEFORE attempting to change any of these to avoid any interference problems. 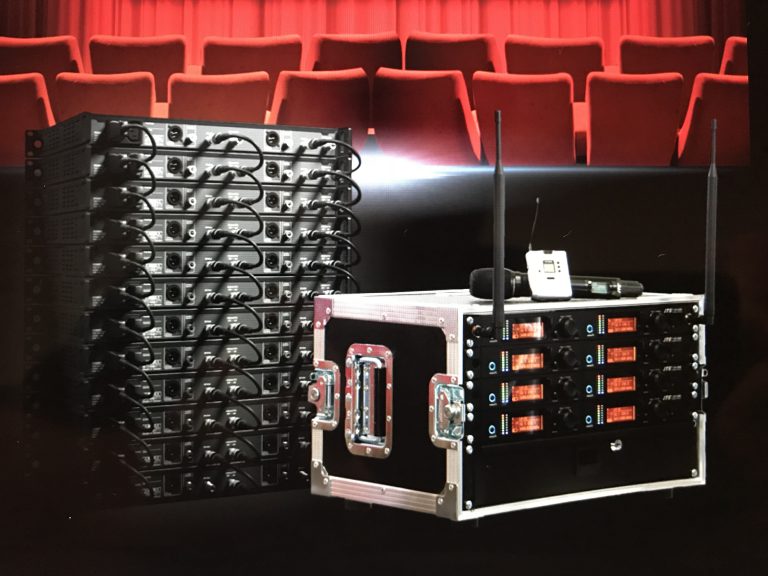