Attaching Microphones for Theatre Use

The best placement for miniature microphones used in theatrical productions is to attach them to the persons head. This can be done in a number of ways, the most popular being with various skin coloured tapes available from your local chemist and other stores. The microphones can also be held in place with hair grips and/or held in place under a wig or with elasticated string etc.

If the hair is short (or there is no hair to hide the microphone) and no wig is being used, then the next best position is to run the cable up the back of the neck, behind one ear and over the top of that ear, with the microphone head taped pointing down towards the mouth, just in front of the ear (not half way down the cheek – this doesn’t look good and is not necessary). This position is also better if a hat with a rim is to be worn as sound reflects off hat rims into microphones, which can make the person sound as if they have a bad cold.

The last real option is to attach the microphone to clothing. Though this virtually eliminates moisture problems, it is the option that is least favoured by the Sound Engineer, because any head movement greatly increases or reduces the sound level due to the variable distance the microphone is from the mouth.

Remember the sound is being amplified, so the difference between quiet and louder sound picked up by the microphone is much greater than if you were to sit in a room and listen to someone without any form of amplification. If a microphone is attached to the head it tracks the mouth whatever the head position is, so the sound level will only change from spoken word to singing, which is easily coped with in most cases by your Sound Engineer.

Before attaching the microphone, clean the skin well with something like makeup remover in the area(s) you will apply tape to, so the skin is clean and dry which gives a much better grip for any tape used to hold the microphone in place. Don’t tape to an area where makeup has already been applied because it won’t stay there for very long. Touch up the makeup after the microphone has been fixed in position, being very careful not to clog up the microphone head, or it will sound extremely muffled as if you are speaking or singing from another room through a wall, which isn’t very nice to hear.

Flapping microphones on stage under hot lights (because the tape has come away due to a poor contact when applied) not only look bad, but there is a very good chance they will not pick up the sound as intended, or worse still, sound through the audio system as if someone is slapping you around, especially if the loose microphone hits any item of clothing, jewelry or skin as it flaps about – Not an audience favourite, or sound engineers for that matter, I assure you!

Try to keep the microphone dry and free from makeup etc at all times. If you perspire a lot then use some paper towel to dab around the microphone head as often as you can when off stage. Remember a drop of moisture to a miniature microphone head is the equivalent to a bucket of water over your head, and if you pull on the cable as you sit down, that is about the same as an adult Elephant pulling at your arms and legs, if you get the picture? Miniature microphones are very very delicate items. Look after them and they will do you justice. Don’t and you will just have to face the consequences!

Follow the above advice and you are as well set up for amplification with as little risk of something going horribly wrong as possible, so long as your Sound Engineer is on the ball… 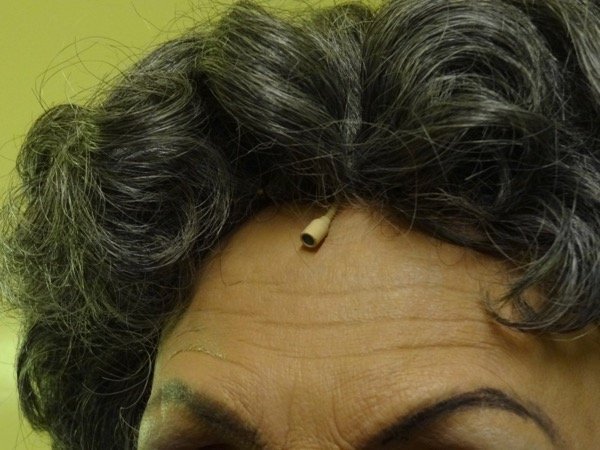