Can I use 75ohm instead of 50ohm coax cabling on my radio microphone and in ear monitoring equipment? It’s all the same isn’t it? It shouldn’t matter, or does it?

Well actually it does matter. Some of you I suspect reading this article just want a Yes/No answer? in that case the short answer is don’t mix 50ohm/75ohm cabling or equipment together. For anyone who might like to know the reason why it matters please continue reading…

So as an approximate guide, equipment that both ‘Receives and Transmits’ such as CB or Ham Radio etc as well as Radio Microphones and Wireless In Ear Monitors etc have an impedance of 50ohms, whereas Receiving equipment the likes of Analogue and Digital TV including Satellite TV and Video equipment etc tends to operate at 75ohm as the priority here is to get the best signal reception.

Then why not mix the two? After all 75ohm cabling produces less signal loss than 50ohm cabling, and I’m using it to connect up receiving equipment such as Radio Microphone Receivers just like TV and Video equipment etc, so 75ohm cabling is better for that, right? Well no because it’s not quite as simple as that. Here is where it all goes a bit wrong…

The equipment is generally manufactured as either 50ohm or 75ohm impedance and mixing these creates standing waves, signal reflections if you like, which can build up to the point where it virtually destroys the original RF signal altogether. This is why you should stick to the correct cabling impedance to match the equipment in use each and every time.

The most common RF coax cabling available is RG-58 (50ohm) and RG-59 (75ohm). There are many others, one of the best for radio microphones and in ear monitor equipment is RG-213 however it’s almost as thick as a small domestic hose pipe so it can be difficult to work with. Even the most common RF connector the BNC is available as a 50ohm or 75ohm version so watch out for that too as this also matters. For those who don’t know a BNC is a twist lock connector and the similar TNC is a screw on type connector.

Other considerations when cabling this type of equipment are as follows. Firstly RF does not like being forced around corners, it always wants to go in a straight line, so avoid sharp right angled bends in the cabling such as going up and over door and window frames and so on. It doesn’t mean you can’t do this but do try to keep it to an absolute minimum and definitely do not kink the cable. Also if you’re using radio microphone systems with remote antenna on RG-58 coax cable, try to keep the length of the cable to less than 10mtrs or you’ll require a signal booster and don’t place the remote antenna too far apart either or you will defeat true diversity reception. 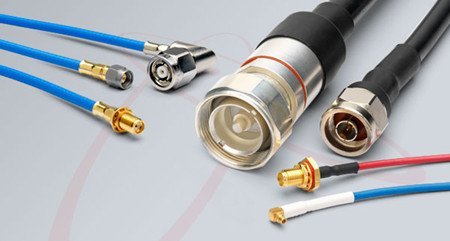